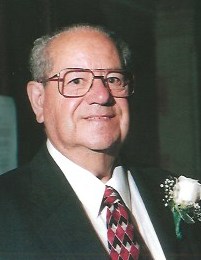 Joe spent 25 years working at Hotel Syracuse before going on to retire from St. Camillus Nursing Home as Supply Services Coordinator. He was a communicant of St. Joseph’s Church in Camillus and was a member of Onondaga Senior Center. Joe was the recipient of the 2007 Syracuse Chiefs Fan of the Year and was a lifelong NY Yankees Fan. As a young boy he was considered a prodigy drummer; by age 11 he had the distinction of having played the drums as guest star with the Big Band Greats; Tommy Dorsey, Guy Lombardo, Gene Krupa, Chick Webb and Benny Berrigan. His love for music was a lifelong passion.

Joe was predeceased by Catherine H. Sherpa, his highschool sweetheart and wife of 45 years, his grandsons, Brian Sherpa and Thomas Sherpa; a daughter-in-law, Angel (Grassman) Sherpa and his brother, Leo.