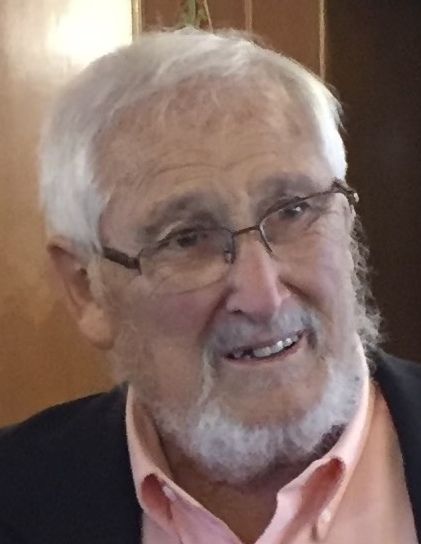 Richard “Dick” Abbott, 82, of Camillus passed away peacefully on December 3 with his wife Mary Beth at his side.  Dick was beloved as a husband, father, brother, grandpa, uncle, neighbor and friend, with a calm, easy-going nature, and fondness for a good party, that endeared him to so many. Born in Elbridge, NY, he was the son of the late John and Shirley Abbott, and graduated from Elbridge High School before proudly serving in the United States Army.   In 1967, he married his love Mary Beth and began what would be an incredible 53 year journey.  The two settled into Mary Beth’s childhood home on Tipperary Hill, where they raised 4 boys and where he embraced family life here as well as the many traditions of the neighborhood.   He was ever present and always involved with his kids and grandkids, and like so many other great Tipp Hill parents, always looked out for others.  There was Saturday bowling at the Ukrainian Lanes and his years as a coach with West End PBA little league. The tailgate of his station wagon got plenty of use in the 80s, helping his kids with Sunday paper delivery. Dick and Mary Beth were honored with the St Pats CYO parent award for their involvement.  Dick rarely missed a sporting event, recital, play or ceremony of any kind through the years for his children and grandchildren.

Dick was a dedicated supporter of Fowler High School, even well after his children graduated.  He and Mary Beth continued to attend games other events, and were long time volunteers with the Booster club, greeting many a patron at the door of Fowler’s annual Casino Night.  He would have been one of the first in line for the home opener at the new stadium.

He was a parishioner of St Patrick’s Parish on Tipp Hill and a great supporter of the annual parish festival, helping for many years in the kitchen and food tent.

Dick retired from Onondaga County’s Metro Plant after many years of helping maintain equipment. He also worked for years at Netherland/Crowelys Dairy. This one came with the added perk of chocolate milk for the kids.    Oh, and the Fair.  Dick absolutely loved working the Fair. For many years, he perfected his craft for parking cars on the lots of Upper 2 and 3, and RVs in the infield. The busier the better.   He looked forward to reuniting with the annual campers, and enjoyed the debriefing sessions at the end of the day.

In the early days he and mom enjoyed snowmobile and XC ski trips up north to Club 20 with the Elbridge crew; He always loved his RV camping.  But Dick truly treasured his more than 40 summers at Brennan’s Beach… his happy place, where he spent time on his site, at the beach, and around the fire with family and with his camp community. In retirement, he looked forward to many Winter stays in Port Charlotte, Florida and beverages at the Tiki bar. He became quite the traveler, and was always up for the next adventure that Mary Beth would propose: Spring Break weeks in Myrtle Beach or the Outer Banks, a trip to Ireland with the family, cruises in the Caribbean, and even an Alaskan Cruise.   Dick also loved pitch league and proved to be a formidable opponent on Thursday nights, taking home a title or two with his partner son.
And he couldn’t get enough of the month of March on Tipp Hill.  From Green Beer delivery, to the Syracuse Parade, the midnight Painting of the Shamrock and St Patrick’s Day itself, Dick was there for the laughs and reunions.  And from its inception, Dick was a volunteer for the Tipp Hill Shamrock Run, helping before during and after on Race Day. A few years ago he and Mary Beth were honored as co-Grand Marshals of the Run…and honor that he cherished.

Friends may leave condolences on this page, or call from 4:00pm – 7:00pm on Tuesday, December 8, 2020 at Edward J. Ryan and Son Funeral Home.   A private Mass of Christian Burial will be held at St Patrick’s & St Brigid’s Church.

In Lieu of Flowers, donations may be made in his honor to the American Heart Association or the St Patrick & St Brigid Food Pantry.

To send flowers to the family or plant a tree in memory of Richard Abbott, please visit Tribute Store
Tuesday
8
December