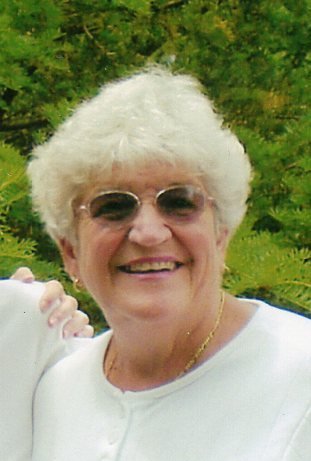 Patricia Edith White passed away December 10, 2013 at her home. Patricia was born May 26, 1933 in Manchester, England, the daughter of Ethel Mary Ward and Horace Greenhalgh. She came to the United States in 1954 to marry the love of her life, Donald Jack White on September 4, 1954. They settled in Syracuse and raised six children. Patricia enjoyed golfing in the St. James golf league at Westhill Country Club, bowling, gardening, and spending time with her 13 grandchildren. She worked at the St. Ann's rectory for over 20 yrs. She was a devoted fan of the West Genesee Band that some of her grandchildren participated in. Her voice and laughter could fill a room and she made those around her feel like family. Patricia was a communicant of St. Ann's Church in Syracuse. She was in the St. Ann's choir for many years. Patricia is survived by husband, Jack; sons and their spouses, David and Susan, Peter and Amal, Paul and Donna, Mark and Lisa, John and Kathleen; daughter and son-in-law, Nancy and Mike Simms; and grandchildren, Kayla White, Pete, Erica, Lauren and Alexis White, Ashley and Paul White, Aidan and Jillian White, Jack, Benjamin and Allison White, and Melissa Simms, all from the Syracuse and Brewerton areas. Services will be on Saturday, December 14, 2013 at 10 a.m. at St. Ann's Church, Taunton. Calling hours will be Friday, 4 to 7 p.m. at the Edward J. Ryan and Son Funeral Home, 3180 Bellevue Ave. Burial will be in Onondaga County Veterans Cemetery. In lieu of flowers, contributions can be made to the Syracuse Salvation Army, 677 South Salina Street Syracuse, NY 13202.
To send flowers to the family or plant a tree in memory of Patricia White, please visit Tribute Store
Saturday
14
December
Onondaga County Veterans Cemetery
4069 Howlett Hill Road
New York, United States
Need Directions?
View Map | Text Directions | Email Directions
Friday
13
December
4:00 pm - 7:00 pm
Edward J. Ryan and Son Funeral Home
3180 Bellevue Ave.
New York, United States
Need Directions?
View Map | Text Directions | Email Directions
Saturday
14
December
10:00 am - 12:00 am
St. Ann's Church
New York, United States
Need Directions?
View Map | Text Directions | Email Directions
Share A Memory
Send Flowers