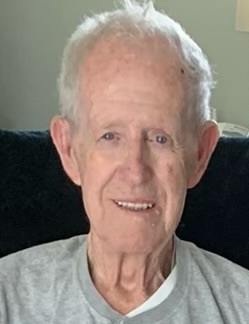 On Friday, November 11, 2022, John (Jack) Francis Mooney, loving husband, father of six, and grandfather of twelve passed away at the age of 90.

Jack was born on October 6, 1932, in Syracuse, NY to Frances and Jerome Mooney. Jack, his brother, and his sister grew up on Markland Avenue in the Stolp/Strathmore section of Syracuse. Jack graduated from Christian Brothers Academy in 1951 and went on to attend Le Moyne College. During the Korean War Jack served in the army stationed in Germany.

In 1958 Jack married his wife, Ann, and together they raised six children. He was most proud of his twelve grandchildren. He  never missed a chorus concert, school play, award ceremony, or sporting event. Both Jack and Ann loved animals, especially their beloved dogs.

For many years Jack worked for the Federal Government and in his later years for National Grid. Jack especially loved his retirement job working for Syracuse University  delivering the Daily Orange around campus. Jack and Ann were huge Syracuse Football fans, enjoying many tailgates, road trips, and bowl games with their friends and family. Jack was a lifelong Boston Red Sox fan and one of his most cherished moments was attending a 2013 World Series game with his sons.

Jack and Ann loved to entertain their friends and family. Jack enjoyed his weekly golf and lunch outings at the Olive Garden with his friends.

Jack is predeceased by his wife of 61 years, Ann, his parents, and brother and sister, Robert, and Anne. Jack is survived by his six children, Kathie St. Amour, John (Michele) Mooney, Sue (Rob) Bracy, Michelle (Mark) Larrabee, Michael Mooney, and Patrick (Melissa) Mooney; his grandchildren, Terry, Ali, and Jamie St. Amour; Jillian and Jessica Mooney; Robby and Matt Bracy; Brooke and Jenna Larrabee; Hannah Rathbun, Kate, and Jack Mooney. The Mooney Family would like to thank Julie, Kim, Sandy, and Cindy for all your love, kindness, and compassion for Jack.

Friends and Family may call from 4-7pm on Friday, November 18 at the Edward J. Ryan and Son Funeral Home, 3180 Bellevue Avenue Syracuse, NY 13219. A Mass of Christian Burial will be celebrated on Saturday, November 19 at 10am at The Church of St. Michael and St. Peter, 4782 West Seneca Turnpike Syracuse, NY 13215. Private Burial to follow.

In lieu of flowers, the family asks that donations be made to St. Jude Children’s Research Hospital or the ASPCA.

To send flowers to the family or plant a tree in memory of John Mooney, please visit Tribute Store
Friday
18
November