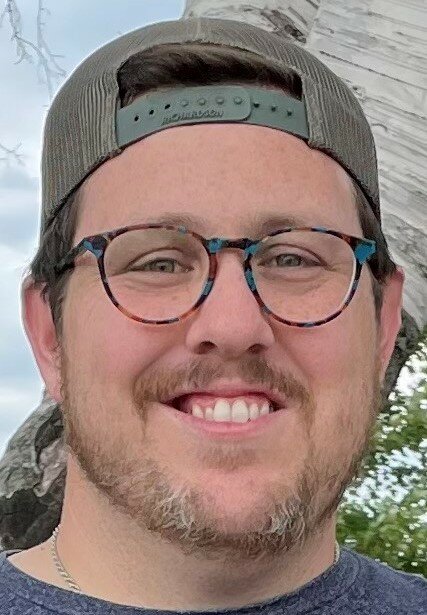 Please share a memory of Christopher to include in a keepsake book for family and friends.
View Tribute Book

It’s unfathomable that the loudest person with the warmest heart and most endearing sense of humor won’t burst in the door any minute in a new pair of sneakers holding a cold four-pack belting out a Christmas song. Christopher Brown Fazio left us unexpectedly on Thursday, December 8, 2022, and the hole in our hearts will never be filled; the joy that he brought us while he was here will never be replaced.

Chris’ greatest happiness in life was becoming a Dad to Eleanor. Every time she signed or said a new word, he felt the sheer joy in his whole body. He loved waking up early with her and getting into trouble together, taking selfies, watching SportsCenter, and chasing each other around the house. He has taught her how to love completely, to feel utter excitement for new things, to love music, the wonder of Christmas, and to just laugh all day long.

Chris and Andrea have lived many lives together. Meeting as college kids at Ithaca, they were instant best friends, and the years there together were spent on dates at Chilis, cheering for his roommates at lacrosse games, and playing Guitar Hero. They were married in Ithaca in 2016 and have found every opportunity to return together over the years. Moving to Los Angeles after graduation, they created a life there filled with sunshine, karaoke, friends who became family, trivia nights, concerts, and experiences they’d talk about often.

Coming back east, they landed in Boston to be closer to his brother, Joe, and sister-in-law, Chelsey; in December 2018, when Chris was diagnosed with Stage IV melanoma, the two would frequently show up unannounced to Chris’ appointments to make sure that he and Andrea were never alone in this fight. Team Faz fought and beat cancer with PMA every day; Chris approached every surgery, immunotherapy infusion, radiation session, and scan with the intention to do whatever his amazing doctors at Dana Farber and Brigham and Women’s Hospital thought best to get through it and get back to Cuse games and Dave Matthews Band shows. He was so grateful for his time in Boston with new and old friends, and loved seeing Ellie get a chance to play with her cousin, Luca.

This past summer, they moved back to Syracuse and into a new home they just built in Jamesville. Chris was thrilled to finally be back in his hometown, and though they’d lived all over, he seemed to always be wearing orange. Chris’ memories of his childhood were of summer nights spent playing basketball and manhunt until the streetlights came on, and dinners around the table with his family every night. The friends he made in elementary school have stayed with him his whole life, and he’s picked up new groups of friends at every chapter along the way. He considered everyone a friend, with countless group texts of constant conversation with an equal mix of inside jokes, stories from high school, pictures of hazy beers, and planning their next night out together. His friends were his everything, especially the 05ers, and he found every opportunity to just be together with them.

Chris was surrounded by family his whole life. His parents, Shawn and Judy, both come from large families and created a home for him that showed him how to put his family first and that together they could do anything. If you’ve heard one of his stories, you’ve heard them a hundred times; the ones about growing up were about Christmas celebrations all together in Watertown and summers visiting family in Florida, where Chris first found his love for the Miami Dolphins. Along with his sister, Stephanie (David), the family of 5 traveled together on many vacations; Chris was always a kid at heart and his adventures running around Disney World were often the start of a crazy story that ended with a boat sinking in the middle of a lake. Chris embraced Andrea’s family (Laura, Mike, Jeffrey, and Steven) as his own and kept the group text busy with pictures of Ellie, Bills and Dolphins rumors, and funny memories.

He loved his dogs with all of his heart. He was always coming home with a new bed to make sure they were cozy and comfortable, even though they spent nights curled up in bed with us. In the summer, he hit golf balls around the backyard while Stewie chased them around. He was devastated when we lost Coach earlier this year, and showed pictures of him to Ellie so she always knew her brother.

Chris was a true lover of music, adding new songs and artists to his playlists regularly. Attending over 100 Dave Matthews Band shows, he was adamant that everyone should see them live; it was his version of a religious experience. His favorite shows were less about the setlist and usually about the experience, talking stories often of the shows at Atlantic City, West Palm Beach, SPAC, Mexico, and The Gorge. If there was a live band at a restaurant or bar, that was an easy decision on where he’d be eating dinner or grabbing a beer. But aside from Dave, he never knew the right words to any songs, and laughed often about how at least his version of the lyrics made sense to him. He listened to music, like everything in his life, loudly, and allowed himself to experience it fully.

Chris loved cooking, and his best dishes included eggplant parmesan, grilled sausage, peppers, and onions, oversized pancakes, and Ellie’s special oatmeal. More than anything, he wanted you to have a great bite of food; whether he was cooking it or eating dinner with you out at a restaurant; he made sure to have all of the dipping sauces ordered ahead so that his first bite was perfect. He loved spending time cooking dinner with Ellie after work.

Chris had a passion for working with kids and was lucky to work with great schools in Santa Monica, Boston, and Syracuse. He treated his students like adults and talked often about how much he wanted to see them succeed in life. He loved wearing his newest sneakers to school and hearing from students that he was the cool teacher. Even his students called him “Faz.”

An avid collector, the sports cards, DMB posters, and sneakers fill the house; but more than things, Chris was a collector of friends. Chris never met a stranger and made it a priority to get all of his people together as often as possible. In his down time, Chris loved to play video games, and could be found many nights in front of his computer, frantically typing to his online friends while rooting for the underdog in a football game - you’d never heard of either school playing, but he’d tell you all about why this was such an important win for them.

If you’ve met Chris, you have a story about him. It’s likely you’ve run into him at a brewery and shared an IPA. It’s possible you tailgated together before a show or a game. But whether it’s minutes together or years of friendship, you have been in the presence of genuine love. His magnetic energy will stay with us always.

Taken from us so suddenly, we’d all like the chance to have just one more beer together. A Celebration of Chris’ life will take place on Friday, December 16, at the TK Tavern at 5600 Newport Road, Camillus, NY from 1-5 PM. In lieu of flowers, donations can be made to the Jimmy Fund.

“Celebrate we will, ‘cause life is short but sweet for certain” - Dave Matthews

To send flowers to the family or plant a tree in memory of Christopher Fazio, please visit Tribute Store
Friday
16
December